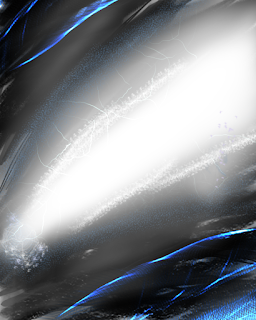 When Bill arrived at the incident, Randy have collapsed. The dark power poison from Victor's sword is now affecting Randy's health. Bill saw that his papa collapsed and shouts.

Bill: Papa!
Marian: Honey, what's happening on you.
Randy: I feel exhausted. I can't move my body.
Victor: Haha. Don't worry about him boy. I will be your new friend now. Come with me.
Marian: Runaway Bill! He's gonna eliminate us all!
Victor: No time to waste now! Let's go!

Victor put his sword in its case and jumped into the crater and then runs fast to get Bill. When Bill heard what his mama told him, he immediately calms down and readies himself for battle. All the lessons he have learn from Protos flashbacks on his head fast and the last lesson that comes on his mind is "What you think, you become."

Victor: The power of electricity! I love it! Soon it will be mine. I don't have to eliminate this one, a cut of my sword to paralize him will be enough.

Victor draws his sword again and walks near. He put his sword up readying to make a little cut to Bill. When he is near enough to Bill, he swings down his sword but the electricity barrier of Bill appeared again and it pushes Victor's sword out from him. The cloak of absorption absorbs again the electicity power coming from the barrier of Bill. Victor wondered what is happening.

Victor: That's a lot of electricity energy! My cloak likes it! You must be a very powerful creature! If I have your power, I will be indestructible! But wait?! That barrier annoys me. I think I need a little dark power attack to destroy that!

Bill remains calm and just looking to Victor. Victor noticed the boy's look at him and gets intimidated by it.

Victor: Stop looking at me boy!

Victor immediately creates a little dark power sphere and then released it to destroy the barrier that protects Bill. It explodes after it touches Bill's barrier and then a dark smoke surrounds the area. When it disappears, the electricity barrier of is charging fast and it created powerful lightnings around it.

Victor was surprised and then it lights even more brighter. Bill raised his right arm with open palm and shouts.

A huge electricity wave fires out of the right hand of Bill and Victor was hit by it very accurately. The cloak of absorption immediately absorbs the electricity power of Bill and it gives resistance to the damage it dealt to Victor.

Victor: Wahahahaha! C'mon give all you can!!! My cloak of absorption will be happy to absorb your power!

While being hit by the huge wave of electricity, Victor's cloak starts to burn. Little by little it was destroyed and it's ability to absorb and resist slowly go away.

Victor: What's this?! What is happening?! I can feel my body is burning!!! Noooooo!!!

Victor received a massive destruction from the electricity wave of Bill. He starts to be burned by it and it puts him to critical state. After the attack, Bill downs on his knees and was exhausted. He breathes heavily. Victor is on the ground with burns created by the electricty power and he is unconscious.
Labels: The Legend's Beginning