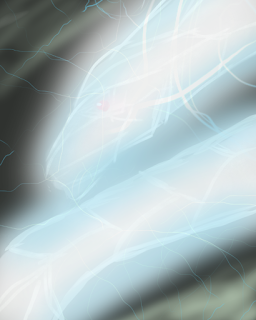 After Bill completed the Awakening Module, his trainor Kim and him went back to the tranee's house. Bill ate fresh raw vegetable diet to replenish the energy that he have spent during the Awakening Module. Bill rested for 9 hours and in the evening they went to a rocky place for the Controlling Module.

Kim: We are going to rush your training. In this module, you will learn how to manage your energy. These rocks are not just ordinary. When you start releasing your power, these rocks will light up with red color.  You will use different amount of energy in each rocks. The small ones need small amount of energy. The medium size needs average and the big rocks need huge amount of energy.

Kim: You will know if you gave the right amount of energy if the color of a rock turns green. There are 1080 rocks here. I will give you 9 energy potions to instantly replenish the energy that you spent. After you completed all the rocks, a huge monster will form out of these rocks. Give all that you can to beat the monster. Got it?

Bill starts to concentrate. He closed his eyes and starts feeling the surrounding. The rocks started to light up red. When he open his eyes he starts hitting the small rocks with his electricity power. He hits the first rock with electrifying energy ball but it didn't turn green.

Bill: Okay. I released too much energy. Decrease a little.

He got the correct amount of energy in lighting the huge rock in just one attempt. He keeps on lighting the rocks and used 6 energy potions for 8 hours. When all the rocks light up green, the rocks starts to form as huge monster. It looks like a gigantic snake and it moves fast.

Bill: Woah! I've never seen anything like this before. Wonderful! But I have to be careful. Lighting the rocks is not that easy. I have to finish you now.

The gigantic rock snake moves forward to Bill as it understands what Bill's intention. Kim is excitingly watching their fight at a far. The gigantic snake smashes Bill using it's tail but Bill dodged the attack. He runs far from it and starts charging his electricity energy.

The giant rock snake immediately follows Bill and swallow him in one quick strike. Kim was shocked on what happened. She starts to worry about Bill. The gigantic snake thought that he have finished Bill until its body starts to light. It starts moving rapidly rolling and circling around like it is being electricuted.

Kim starts to wonder what is happening until the gigantic rock snake explodes to pieces back to its piece by piece form. After a while, the rocks color turns to a normal rock. Bill walks forward with electrifying sphere around him to where his master Kim is.