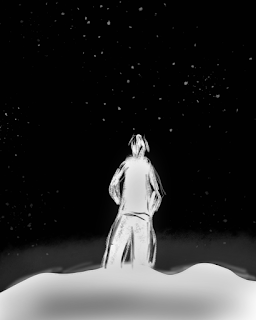 When Bill get up after the fall, he noticed that he's not hurt. He walked out of the destroyed land where he landed and went inside the dark forest. He sensed wild creatures around him. His fear of wild creatures came out. It is the dark encounter.

Bill: I thought I was dead. But here I am without a scratch. It's like I'm in a dream. Now I am sensing wild creatures around me.


A huge dark lion with red eyes appeared in front of him. The lion is very angry and it looks like very hungry ready to devour him.

Bill: I guess this is just another test. Go away! I don't wanna hurt you.


The lion runs near to him and he panicked.

Bill: Oh no! He really wants to attack me.


The lion jumped into him but his reflexes is better than the lion so he dodged the attack. He runs as fast as he can and the dark lion pursues him.

The lion jumped to him for the second time but he created a web made out of lightning electricity. The lion was trapped in it and is electricuted. The lion is in rage. It strikes using its claw and the lightning web was destroyed.


Bill charged electricity energy in his hand and released it to the lion. He was surprised that the lion did not affected by his attack. The lion jumped to him and bites his arm.

Bill: Is this what you want? Go on! i'm not scared at you!


Bill overcomed his fear of the dark lion and he just looked at its eyes while it bites him. The lion disappeared.

Bill: Okay, I get it. But I have to figure out how to go outside of this place. I need to find the door out.


He stands up and then he noticed that the place have changed. The surrounding got even darker and he noticed a man with black hat.

Bill: I guess this is another test. I have to overcome my fear and soon they will disappear.

Unknown: You must be enjoying this, right?


The unknown man shows himself. It was Victor.

Bill: Victor? What are you doing here.

Victor: I'm here because you created me. Guess what? I have a surprise for you.


Victor shows his victim on his back. It was Bill's father.

Bill: Papa! Get away from him!


Bill starts to get angry. Bill fires a wave of electricity energy to dark Victor and it disappears. He runs to his father.

Bill: Papa!
Randy: I put you in great danger. You are going to a place where there is no assurance that you can come back alive.
Bill: No pa! It's my choice.
Randy: Hahahahaha! You are crazy!

Dark Victor: Feel the pain! Hahahaha! You will not make it! Nobody comes back from that planet, even you. You will hopelessly die here. Surrender now and you will have the chance to live, back to your normal life.

Bill: No!
Victor: Huh?! Are you out of your mind? They don't even care for you. They want you to retrieve something that is impossible! I'm your real friend, boy! I am giving you the chance to live a normal life.
Bill: No, it's my choice to retrieve the antidote for your dark power poison. You are not my friend, by the way!

Dark Victor: You're an insane brat! Take this!


Bill: You know what? You're right. You are absolutely right. I created you, that's why you are existing. My fear and negative thoughts is the reason of your existence. I can make you stronger but I can also destroy you if I want to. I can also get out of this place If I want to. It's just a matter of thinking.

Dark Victor: Huh?! No way! You cannot do it.


Bill instantly appeared at the back of dark Victor.
Bill: Why not! You are just a product of my thoughts. I want you out of my mind!

Bill's body starts to release high voltage electricity power that melts the dark Victor. The place turns to all white and then a door appeared in front of Bill. He opened the door and went outside. He saw his master Kim waiting for him.

Kim: Excellent! You have completed all the training. You are ready for the registration in the Globe Island.


He is now ready to register as new hunter in the Globe Island where he can retrieve the dark power poison antidote.
Labels: The Awakening